Grandmother’s Diamonds Are For Ever. (Part One)

A beautiful diamond ear ring sparkles in Rati’s ears. Though small, it dazzles despite its age and brightens up her face. The studs were her grand mother’s gift to her mother on her wedding. They were presumed lost once, but she got it back under surprising circumstances.

She tells me the story of her grandmother, who was married at nine years and widowed at twenty one. It brings a lump to my throat when I hear her.

When you look at a photograph of my friend Rati’s grandmother, you see this elderly lady with tonsured  head wearing just a dull coarse saree and no blouse.

But despite the widows garb, if you looked well, you will see the intelligence in her eyes, the determination in her stance and you will  know that she came of a good lineage and a pedigree stock.

When Rati would beg her Ammama to tell her about her grand father, the lady had one grouse. She  was a midget when she was married at nine and her husband was a short thin man in his twenties. Over the years she grew tall and stately and towered over her husband . When they walked side by side, the  town folks would tease them saying that she looked like a milch cow and he, her suckling  calf.

How cruel can people be?

When she was 21 yrs old, her husband died of jaundice.

Life changed for ever.

She came back to her parent’s house with two children, aged three and one -and-half years.

It was the terrible 20’s. Widows were tonsured and made to wear coarse saree and no blouse. They were ostracized and made an inauspicious entity delegated to the background.

Sometimes Rati would ask her grandmother, why she let her long tresses be snipped off, and she would smile feebly and say,  ‘my father threatened to kill himself if I did not.”

“But why?” Rati persisted. “Why was your father so heartless?”

“He was a typical man of the times. It would have brought shame on his family if his widowed daughter did not look like one.”

Their argument was that, young widows fell prey to lecherous men and making them look unattractive was actually for their protection.

So a barber was brought home. When his work was done, he left behind a  disconsolate Ammama,  clean shaven and shorn – a  twenty-one year old widow deprived of not only her beautiful sarees and blouses but also her dignity.

His periodic visits continued to keep Ammama, with a bald pate always.

Her humiliations and hardships started from then.

As a widow, she was debarred form gracing auspicious occasions, stopped from eating food like onions because of their aphrodisiac properties, mocked at if she laughed or came before men. The list was endless.

Coping with life, became her way of life.

Ammama’s  father owned fields where the woman folk would pitch in and work. Ammama found herself there, working strenuously to earn her keep.

“Was it not inconvenient to be without a blouse?” Rati would question her.

“Yes, specially since I am so well built.” She would say.

Being of a big stature, this is what she found embarrassing.Wrapping the saree round and round around her bossom  for support and to keep out ogling eyes and ‘male-gaze,’  (her words) she managed multiple household duties and field work. Everything from cooking and washing to weeding and hoeing the fields, fell on her shoulders. She worked from dawn to dusk without shirking any duty.

Since, babies were being born quite often in the family,  she helped the midwife and took an interest in obstetrics. Soon  she was delivering babies on her own. 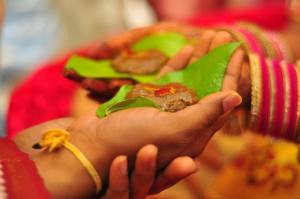 Ammama also became interested in medicinal herbs and began to concoct mixtures and potions as  remedy for many kinds of  illness. Her post natal medicines and food were very therapeutic  and  she became a name to reckon with.

It was Rati’s proud comment that her Ammama had a herbal portion to stop even epilepsy.

It was time to find life partners for them.

Ammama bought a small diamond ear ring to present her to daughter as her wedding gift, the only jewel she could buy with the money she earned as a cook, a midwife and a farm help.

Family and friends, came forward and helped the widow get her daughter married.

The inauspicious widow, stood far from the marriage proceedings, and watched as the groom tied the thaali (wedding thread) around her daughter’s neck.

May you live a Sumangali (with your husband) always.

Her inner voice repeated gain and again, more sincere and heartfelt than all the others who had gathered to witness the wedding.

Photo By Avinash Uppuluri at Unsplash

Please leave your comments in the box below. I would love to hear from you.

8 Responses to Grandmother’s Diamonds Are For Ever. (Part One)