In our home town deep in the south of India, people believed  in the powers of the evil eye. When your life was all smooth sailing and suddenly  calamities appear to rock your boat then it was assumed that an envious person had sent bad vibes your way and cast his or her evil eyes on you.

Asma’s grandmother was a staunch believer in the detrimental effects of the evil eye.

If she suspected that someone had cast their evil eyes on the family, she would take immediate action to avoid its effect. She had a potent countermeasure to ward off these malevolent forces.

When ever she spied Asma being listless or coming down with some illness  or if some unforeseen misfortune strikes their family, she would bring out the red chillies.

This is how it worked.

She would take an odd number of chillies in her fist and she would wave her hand before Asma, from down to up and inside to out,  in a circular manner muttering her chants.  Asma herself thought that the casting off  process  was all hogwash  She laughed at her grandmother’s  chanting as mumbo jumbo.

Asma would run to hide if they saw the chillies come out. The chants muttered by her grandmother were also too funny to say the least. It went like this:

After the casting off ritual was over, the grandmother would take the chillies and burn them in the charcoal stove in the backyard.. The smoldering peppers let off  a pungent  smell and made everyone sneeze. But her grandmother would be pleased as  punch saying that the effect of the evil eye was leaving their house.

A few ladies  had come to visit Asma. They came from a lower middle class family and were awed by everything in her house. They kept exclaiming over her possessions, all the paraphernalia she had collected over the years and beautified her house with. They commented on the furniture in the hall, the crockery in the kitchen and even the plants in the garden.

In the beginning, being an innocent person, Asma was actually very pleased with their praises.

After tea, when they were about to leave, Asma’s mother who was getting ready to go to the beach with Asma’s dad and her children, offered to drop them home on the way.

One of the ladies in the group being more impertinent than the others blurted out, “you rich people, with cars and drivers…can go anywhere you want, any time you want.”

Asma was shocked and put off by their words, so full of envy. But her mom just laughed at their impudence and gave them a lift to their destination.

Long before her parents and kids were expected home, her door bell rang. Opening the door Asma found that it was them outside, all in an agitated state. Her dad was bleeding in his legs, with his clothes all torn and soiled. Her mom was in tears and the kids weeping in distress.

“A stray dog on the beach was growling at the children. I tried to chase it away. But it 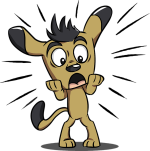 turned on me and  took hold of my pant legs and would not let it go. I got bitten while trying to free myself from its hold.

Her father was trying to sound brave despite being thoroughly shaken by the experience while her kids would not stop crying.

“Ring up your husband quickly.” Her dad ordered her.  Asma’s husband was a doctor and the need of the hour.

What had started off as  a happy outing had turned into a blighted one. It was quite a horrible evening and a long time before everyone settled down. Her father was attended to, the kids were pacified and her mom’s tension was mitigated.

Asma’s thought about her grandmother who would surely not have let them go out after hearing those ladies’ envious words. She would have done her ritual to ward off the evil eye, before she let her family venture out.

Asma talked about the day’s events with her mother later that night. Words like  Evil Eyes, Drishti and Buri Nazar  which her grandma used to repeat often, came to her mind.

“Are these things true?” Asma questioned her mom.

“May be true.” Her mother replied, still shaken by the bad experience at the beach.  “You are never quite sure about such things.”

Asma agreed with her. Yes, you can never be sure about some beliefs.

True or not. Asma does not probe deeper. She is wary of the green eyed monster.

These days, Asma says that she  finds herself reaching for the red chillies container, every time she fears that someone might have cast their evil eyes on her.

“Better  to be safe than sorry.” She says, shuddering at the memory of that evening when the envious relatives visited her home.

This entry was posted in We Indians! and tagged eveil eyes, grandmother, Indian stories, red chillies, rituals. Bookmark the permalink.