Some things Are Not Meant To Be. 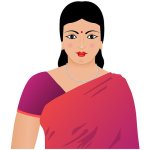 Whenever I met Salma aunty at weddings and social gatherings, she would say something to me that I thought was very funny. I had a tough time not cracking up and laughing every time she said that.

Salma aunty was my dad’s cousin. She was a very sweet lady, always smiling and talking. Every time we bumped into each other, which was not too often, as we lived in different towns, she would always chat with me for some time. When she took leave of me, she would say THAT.

I often  teased my dad about her proclamation and he would say , “I have come up in life . That is why she says that. If I had fallen on dire straits, her thoughts would have been different.”

Well, the story goes like this. When my father and Salma aunty were young, the elders decided that they should get married. They got engaged and my father who was working in Sri Lanka (then called Ceylon) was over the moon.

Their wedding was to take place two years later. During this period, when my father came down to India, he would bring lovely gifts for Salma aunty. Heart shaped boxes of chocolates, imported from Britain. Tin boxes of biscuits with cardamom icing. Delicate laces which Ceylon was famous for. Tea leaves for her dad. Cinnamon sticks to spice up her mother’s curry. Lovely gifts for his future wife. My grandmother and aunt  tease him even to this day, about his well thought out tokens of love.

But sad to say, something untoward happened at that time. My father did not marry his cousin Salma.

Salma aunty’s  older sister, a mother of two, died suddenly of some rare disease. The motherless children clung to Salma for love. Faced with such a situation, her parents took the decision which was customary in those times. Salma would marry her sister’s husband and be a good mother to those children.

I don’t know if Salma protested or not. It may seem very surprising to us now. But in those days, girls like Salma were like the sacrificial goat. They were garlanded and with heads bowed,  led to the altar their parents decided upon.

Salma was married off to her brother in law with in a short period. After some initial hiccups, my grandparents settled upon a new bride for my father. They were married and I was born a year later.

If I asked my father, what his feelings were , when he heard the news about Salma being married to her brother in law, he would brush me off by saying that he does not remember.

“I must have been sad for some time. But I married your wonderful mother right?”  He would laugh looking at my mother to see her reaction.

But Salma aunty must have been devastated. Especially when my father had four lovely children, started a business in Chennai and grew from strength to strength. He traveled the world, always with my mother by his side and he was also a philanthropist who did so much for the betterment of our home town.

Salma aunty, married to an older man, had one son and  a middle class life. That was her Karma.

Who can go against God’s will?

Like I said, on the occasions that I met Salma aunty, I made an effort to be nice to her.

On these encounters, she would hug me, and plant a kiss on my forehead and say those words which I in my childish way, found funny.

What Salma aunty said to me, was a reflection of her deeply buried feelings of many years, a longing for what could have been. If only …!

What did she say laughingly to me, every time we met?

She said, “You should have been born from my womb. No ma?”

Only, being not so smart, she said ‘stomach’ instead of womb.

“You should have been born from my stomach. No ma?”

Now that I am older and wiser, I think that those are some of saddest words a woman could ever say.

This entry was posted in We Indians! and tagged short stories. Bookmark the permalink.

29 Responses to Some things Are Not Meant To Be.