The Grandmother’s Decision- Right Or Wrong?

Posted on February 2, 2020 by Talkalittledo - For Life Is Funny.

As a child my relative’s daughter grew up in her grandmother’s house. Her mother had died when she was young and her father had remarried. The grandmother had taken responsibility of the girl and even though they belonged to a middle class family, the lady had brought up the child well and instilled her with good values. She also educated her up to under graduate level.

The granddaughter was a lovely girl,  witty and so full of life. Everyone loved to converse with her as her jokes and repartee kept them in splits.

The grandmother adored her granddaughter.

When it was time to get her married, many proposals came for the girl. While the lady was deliberating over each proposal, a very rich and well known family approached her. They were eager to get the girl married to their youngest son. Everyone was surprised and happy. They thought the girl was going to have an affluent life.

But the grandmother refused the proposal.

“Why did you reject this proposal?” People asked in surprise. “She would have lived like a queen, in that house.”

“No. My granddaughter would not thank me for it.”

The grandmother told people that every day of her life, her granddaughter would be thinking, “had my mother been alive, she would not have done this.”

“Why don’t you ask her and let her decide.” The relatives badgered her. “You are denying her a rich life. What sort of a groom can you find for her on your meager income?”

The grand mother did not budge from her decision. Her mind was made up. She sent word to the rich people with a negative answer and they too were shocked.

She got her granddaughter married to a man of her choice from a back ground that was as humble as hers.

Many times when her head was bowed in prayer, the old woman asked the supreme being if she had done the right thing. She often wished that the rich family proposal had not 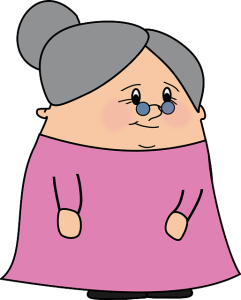 come for the girl. She knew that all her life she would be told by people that she had taken a wrong decision.

But every time she saw her granddaughter with her husband, chatting nineteen to a dozen, teasing and making him laugh with her wit, she would sigh and think, “May God be my witness. I am sure I did the right thing.”

Are you wondering, what was wrong with the rich boy? Why did she refuse that proposal?

The boy from the wealthy, well known family was… DEAF and DUMB.

Readers, please reply. Was the grandmother’s decision, right or wrong?

This entry was posted in Uncategorized, We Indians! and tagged grandmother, Indian tales, short stories, wedding. Bookmark the permalink.

2 Responses to The Grandmother’s Decision- Right Or Wrong?