In India, cricket is a national passion. Who gets clean bowled here, the boy or the lady?

My husband and I  live in a big apartment complex comprising of some hundred flats. There is a common swimming pool and an Indoor Games Centre in our complex. My husband plays Table Tennis

here during the week-ends.

A young boy of about ten years befriended my husband and was his partner–opponent-playmate, during some of  these game sessions. He lived in one of the flats and was a chirpy boy, full of vim and vigor.

I often teased my husband saying that the boy was treating him like a hero and was his admirer.

One Sunday morning, when my husband had decided to sleep in late, the boy rang our doorbell and asked for him. Reluctantly my better-half gave him audience.

“Uncle, will you come to watch cricket match with me. My parents are out of town and I have no one to accompany me.”

Feeling sorry for the fellow looking so woebegone, my husband agreed to ‘take’ him to watch a cricket match.’

But he asked the boy to give him half an hours time to get ready.

When the boy dashed off home in a happy frame of mind, my spouse started his cribbing.

“What have I let myself in for? What a waste of a free Sunday!  I have to sit with ten year old snotty nosed kids and watch some god-forsaken-school teams beat each other up”

I must add here that my life partner was not a big cricket-fan, unlike million other Indian men. But I was just the opposite of him, devouring every game shown on the television eagerly and reading every tidbit about it with gusto.

The boy was back much before the stipulated thirty minute period had elapsed. He told a surprised looking me, “ I will wait here in your house, till uncle gets ready.”

As the boy waited in the hall, my husband sat sipping his morning coffee and flicking through the day’s newspaper.

I casually asked the kid at what time the match was bound to start.

He replied, “It has already started.”

“Where is the match taking place? Who are playing in it? I asked, just to make some conversation.

The googly he delivered next made me go ‘howzaaaat!!!’

“At Chepauk Stadium aunty. It is the ODI (One day International) between India and Pakistan. I have three free passes. You can come too, if you want.”

OMG! The boy had three free VVIP passes to the great ODI tournament. That too between arch rivals India and Pakistan. Every man and most women in my city would give an arm and a leg for just one ticket.  Here we  were treating the ‘angel in shorts and T-shirt’ lightly, thinking that we were doing him a favour.

You should have seen the way I swung into action that day. In ten minutes I was dressed and out of the house, pulling my husband out along with me.

I cannot describe what fun we had that day. We had a ball! (Pun intended)

It was a dream come true for me, watching the players up close and shouting myself hoarse at every turn of events. My benefactor, who was used to seeing a staid woman at home, was clean bowled at my transformation. The new spirited spunky woman took him by surprise.

He apparently told his parents later: 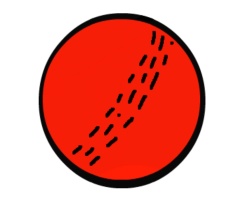 “Aunty knows more about cricket, than uncle does.”

Thank You Skipper! How about a Follow-on?

As told to talkalittledo by Fathima. Written by: Gulsum Basheer.

This entry was posted in Darndest Things Children Say, We Indians! and tagged cricket, humour. Bookmark the permalink.

15 Responses to At Cricket-Clean Bowled