My daughter got married to an engineer working in the US. We lived in a small town in Tamil Nadu. A few days after the wedding we took my son in law and family to a newly opened restaurant just outside our town.

We were strict Muslims and ate only Halal Food. So we wanted to ascertain that the restaurant used only Halal meat. My husband called the waiter to the table and asked him, “Is the meat cooked here, Halal Meat?”

The waiter who had been over joyed to see such a large turnout of customers was too eager to clear all our doubts on this point. So he rattled off:

“Sir, everything here is Halal. The mutton is Halal, the chicken is Halal. Why, even the COOKER her is Halal. His name is Iqbal!”

The poor fellow meant that the CHEF was a Muslim man. But in his excitement he over did his sales pitch.

My son in law was very amused at the incident. Every time he sees my daughter using a pressure cooker at home, he says, “Halal Cooker, right?” 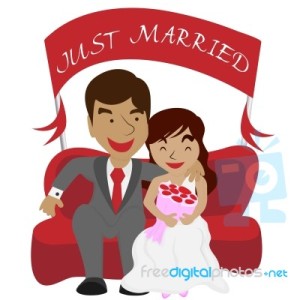 Three of my nephews got married in our native place on the same day. They brought their wives to Chennai on their honeymoon. The three couples spent a whole day in my house. As I was busy cooking an elaborate meal for them, I wanted to amuse them and keep them from getting bored. So I called up my father asked him to rent some film VCR (like our modern DVDs) and send it across.

The movie  which my father had rented was a big hit with the brides. The movie’s title was “Pondaati Sonna Kettukanum ” which literally translated means, “Listen to your wife’s advice” or quite simply, “Obey your wife.”

This entry was posted in The Newly Married Indian and tagged humor, Indian, wedding. Bookmark the permalink.