How The Monkey Became A Dog. 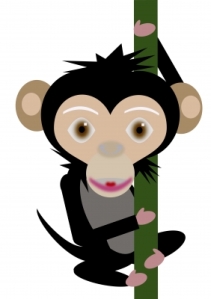 When I was studying in Fathima  College in Madurai, my friend Usha, had this absurd habit of referring to everything and anything as “monkey.” That too, she would use the Tamil word for monkey, “Korangu”

Her conversations were replete with the word Korangu or monkey.

Once we had gone on an excursion to a tourist spot. At noon, we all sat in a circle under a tree and opened our lunch packets amidst much chatter and laughter. Suddenly my friend exclaimed,   “S@#$#, MONKEEEEY!” (Chee …Korangu)

That’s all. We girls, all ten or fifteen of us, stood up in fright, holding on firmly to our packets of food, water bottles and our hand bags. We looked hither and thither and asked Usha, “Where? Where? Where is the monkey?”

Seeing the fear in our faces, Usha looked sheepish and pointed to an animal trying to get at her packet of food.

A lean hungry stray dog had come scavenging for food. As usual Usha had referred to something affecting her as a monkey. In our fear, we girls had forgotten her habit and had really expected to be vandalized by monkeys. LOL!

2 Responses to How The Monkey Became A Dog.